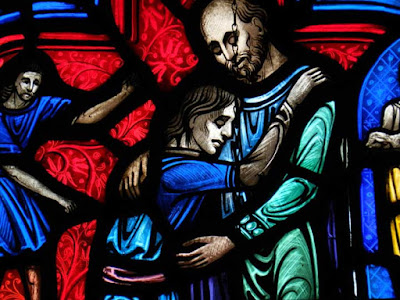 Joshua 5:9-12; 2 Corinthians 5:17-21; Luke 15:1-3,11-32
What a wonderful parable! It's about relationships, a favourite theme of the bible.
Four relationships were wounded by the sin of Adam and Eve:
In fact, sin is defined in terms of what it does to our relationships.
Today we all live with the effects of sin - all of us. Not a single one of us knows how to relate properly. We are all to a greater or lesser extent wounded by the sin of Adam and Eve. Fortunately God our Father does know how to relate. He is not impaired or wounded by sin - his relationship with us, his children, is lived perfectly day by day.
In the parable we have just read the father is, of course, the father of the two boys, but he is also meant to be seen as God, the Father of us all. And so this parable offers us a glimpse into the very heart of God, as we watch him relating to his sons.
The first thing we notice is that this father is not interested in the money. The boy asks for it and he immediately gives it. The boy spends it all and when he returns to the father there is not a word spoken about it. The Father doesn't say 'Okay, where's the money? What did you do with it?'
The second thing we notice is that the father is not interested in the sin. This is remarkable, wouldn't you agree? When his son appears he doesn't question him. 'What have you been up to? What are these rumours about you and wild women and booze?'
Not a word is spoken by the father about the wasted money or the sins; all he wants is his son! So simple!
And yet, without doubt, the younger son has sinned and sinned grievously. There can be no argument about that. He admits it himself: I have sinned ...
But his real sin was that he walked away from, turned his back on, his father. By doing this he:
One could make a case here that the son, by lowering himself to the level of feeding the pigs whose food he was not even able to share, dishonoured the world of nature by allowing himself to come into this wrong relationship to it, as Jews were to have nothing to do with pigs.
And so we come to the (divine) heart of this parable and like every heart it has two halves.
The first half is the son's repentance. From the moment he asked his father for his share of the estate and left home this boy began a journey which would lead him step by step to this moment of repentance. The journey was filled with pleasures and pain, noise and excitement, and many experiences of his own weakness, until finally, there in the pigsty, he came to that graced moment when he fell to his knees and was able to cry out: I have sinned ... I no longer deserve to be called .. son.
What a wonderful moment this was! What a moment of sheer grace! A moment every parent of a wayward child prays for.
But the recognition of our sinfulness is a brutally painful moment and would be nothing more than unbearable insight were it not for the other half of the heart, the mercy of the father, which catches the sinner as he falls to the ground in despair. Already, in the very awareness that he is able to go back to his father there is the presentiment of that unconditional mercy and forgiveness which embraces him as he meets his father.
In Rembrandt's painting of the prodigal son this boy kneels before his father very much a different person from the brash young lad who left home.
I no longer deserve to be called your son.
This is a very important milestone to have reached. It was the experience of Adam and Eve after they had stretched out their hands to the forbidden fruit. It was also the experience of the publican in yesterday's Gospel. He stood at the back of the church beating his breast asking for forgiveness because: I am a sinner .. .
The Pharisee had not yet reached that moment of wisdom about himself. He stood at the front of the church and bragged about his own good deeds. Poor fellow! He was, as yet, blind to himself and his proper relationship to God his father.
Nor was it yet the experience of the elder son who thought of his relationship to his father much the same way as the Pharisee: I have slaved for you .. and never once disobeyed one your orders.
Again we have to say - poor fellow! He spoke to his father as though he were his slave or a servant, which, ironically, is how the younger son intended to invite his father to treat him. Fortunately the father never let the boy get those hurtful words out.
I would say we all need to reach a point where we can recognise our sinfulness and unworthiness to be children of God, a point at which we can say with the rest of mankind: I am sinner! My insistence on this is not a morbid harping but a joyful leaping - into the merciful arms of a loving father.
- March 07, 2010